Over the weekend while having breakfast, we had a very healthy and constructive “debate” around performance of Modi Government. Arun Jaitely as finance minister had presented his 4th full budget. Wife was not happy as there were no benefits to “middle class”. It’s a popular perception has been Modi government has failed to deliver any benefits to most important yet highly neglected constituency of middle class salaried income tax payer.

India has very complicated income tax structure. Due to different sections, sub sections and clauses the process is very cumbersome. Also a very small subset of 1.25 Billion people pay income tax. In spite of this, successive governments have given least attention to this group. After shackles on economy were lifted in 1991, India’s middle class has seen rapid rise. Due to growth in job markets, middle class base is growing. This is very positive sign for economy. So future governments would need to pay some attention to this group for sure.

Having said all this, was this budget really that bad for middle class? Has Modi government done anything to improve situation of economy? Well the budget was not as bad as people portray it. This is first time in few years, no new “sin” taxes (i.e. tax on liquor) were introduced. This is good news for middle class. The problem both me and wife are total teetotaller. So, we haven’t got any benefits!☺ On a serious note, Modi government has done some really good work in last 4 years. However people have had lot of (and at times unrealistic) expectations from this government. Part of this is down to Prime Minister’s poll promise of “Acche Din”. This is very subjective term and can be used in multiple ways. There is no clear criteria defined on what would be considered success. It’s important to define success criteria to allow expectation management.

(At the risk of being labelled a “Bhakt”) I am going to take a stab at highlighting top 3 reforms and good work this Government has done pertaining to economy and laying foundation for long term improvement.
Let’s get started with burning topic of income tax. Considering this was last full budget, there were lot of expectations around Government tweaking slabs to reduce tax burden and putting more money in people’s hand. As it was not done, people are left disappointed. But closer look at data for last 4 years shows Government has actually done some work already. Whether this is sufficient or not, is a different debate. Here are numbers to prove it (this has been inspired from a tweet). Below calculations are done on base income of ₹ 1Million (10 lacks). 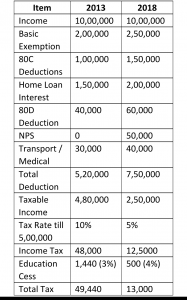 In net terms, taxpayer has to pay less tax and people are saving nearly ₹ 35,000. There are 2 bigger benefits that are there for everyone. First benefit is drop in inflation rate. Inflation has come down from peak of 12% to around 4%. As a result, people are spending less money for their day to day needs. As a result of drop in inflation, interest rate has come down by about 2%. That’s the 2nd benefit. Due to fall in interest rates Home Loan EMIs have gone down.

Now coming to wider economy, there have been significant reforms. GST is probably going to top the list for most people. It has improved tax structure and brought lot of transparency. Goods movements across states has become much easier. There are no long queues at state borders for Octroi inspection. As a result, transportation efficiency has improved drastically (and corruption has reduced).

For me, second biggest reform has been bankruptcy code. This would address problem of NPA for good. Off course, banks and regulators need to clean up current NPA mess. But this law has enabled banks to take control of situation and recover their losses. Thanks to these provisions big industrial houses like Ruia family (Essar Group) and Anil Ambani (for Reliance Comm) had to scramble and clean up the mess. This has ensured big corporates are now working with Banks to clean-up the mess.

Third big reform has been revamp of subsidy. For far too long successive Indian Governments for idiotic reasons kept subsidising Oil prices. This resulted in tax revenue not being spent on issues on hand. No wonder our country lacks basic needs like sanitation, roads and sound drainage system. With Petrol and Diesel subsidy taken away and LPG being linked to income, government has saved lot of money which is being spent on addressing infrastructure needs. Linking Aadhar to subsidy regime has helped plug gaps in Public Distribution System. As a result, majority of money government spends for the poor is actually reaching poor and middle men are no longer able to run away with it. Off course, Aadhar is facing it’s own challenges and legal battles. Some of the concerns around data security are genuine and need to be addressed. But it has thus far eliminated lot of  leakages. Linking LPG subsidy to Aadhar saves Government about $2 Billion a year!

Off course we still have a long way to go in terms of reaching end state. There are some additional hard decisions are requires. Modi has his work cut-out for 2nd term. There are lot of other areas that require attention. As a ordinary citizen, I hope he acts on them. My wish list for top 3 things that need attention –
1. For all projects that are started, there has to be a fixed end date. This applies to projects from Gram Panchayat to Central Government. If there are delays, then penalty regime has to kick in and start making people accountable. The delays have resulted in increased cost and additional logistic nightmares.

2. GST has streamlined and simplified indirect taxes. Time has arrived to do the same for Income Tax. Direct Tax code should be implemented. Also tax base should be expanded. Make agriculture taxable if it’s above certain threshold (like 10L and if required have different slabs for it).

3. Continue subsidy revamp. There are lot of areas like Railway Travel that needs subsidy changes. Right now Railways recover about 53% passenger travel cost. For AC travel ticket should not be subsidized. Let people pay 100% amount from their pocket. Educational institutions like JNU, FTII shouldn’t be funded by taxpayers. They need to be self sufficient.

Needless to say result of 2019 elections is going to play a huge part on how things unfold over next 5 years!

The detailed study and plus points are appreciated.Our attitude is self centered, if we are affected every thing is wrong this mind set must be changed. Well done. God will give you strength to this in such positive way.

A nice analysis. It is difficult to satisfy all as their demands and desires go on increasing. Mody Government is definitely on right track. It is difficult to fulfil all the dreams at one go, Let us wait and watch by supporting the Govetnment for all the good work

Nice analysis but with negative propaganda and cast issues, the ahead is tough Hence it can’t be predicted the results of 2019 elections though we feel that the present government to continue.

[…] One fascinating aspect in India is always about urban rural divide. According to 2011 census, around 70% of India’s population resides in rural areas (this urban – rural divide is often called as Urban India v/s Rural Bharat). Primary occupation of Rural Bharat’s population is agriculture. As a result, every single party claims to represent farmer’s interests. This rural population could be one of the most important factors that may decide outcome of 2019 elections. Urban middle classes and small business owners have been traditional BJP vote bank. However, perception that’s been created is BJP Government has done nothing for this constituency. This is not completely true. BJP Government has done lot of good work that has helped middle class directly and indirectly. An overview of benefits that middle class got has been explained in an earlier post. […]

Planning a coup is important but execution is more important

Does Big Tech have too much power?